Whose eyes are these?

Hello, I'm Qi Jian. These are my thoughts about the TV shows I keep up with, which number quite a few.

These are my thoughts on the second season and the season finale, “Heaven is a Place”.

Halt and Catch Fire did not get off to a good start in its first season. The season suffered from too much Joe McMillan and a niggling feeling that AMC was trying to imitate the Mad Men formula to create a new hit.

Despite the weak ratings, AMC renewed the show for a second season. Turns out that second chances do work, because Halt and Catch Fire has become the best show that AMC can offer after Mad Men‘s departure.

For a start, the season was set around Cameron’s start-up Mutiny, a software company staffed with mavericks and geeks alike. Cameron and Donna were in charge, putting them firmly in the spotlight this season, while Joe and Gordon have stayed on the sidelines.

I made several gripes that Joe was just over-exposed in the first season, and the second season does well in pulling him back to the fringe of the action. Even as Joe gets more involved in this season’s plotline, the mere fact that he’s not in control of everything makes his presence tolerable. Lee Pace continues to do a good job, and I sincerely felt for Joe when he found out that his father-in-law had played him in the process of gutting Mutiny. Joe gets his sole Don Draper moment in “Kali”, the ninth episode, when he gives a rousing speech in front of a ballroom of investors, but that’s the most that Lee Pace has had to do.

Meanwhile, Gordon has floundered since his Cardiff Electric exploits. Scott McNairy continues to do amazing work, especially since Gordon has a horrible time this season – his deteriorating health and manic condition forcing him to deeper levels of despair.

Also, we have seen Tony Huss’s Bosworth stay around in the Mutiny crew. Bosworth provides a convincing counter-weight to Cameron’s naivety and rashness, and their scenes together always sparkle with their chemistry. More amusingly, Bosworth has the chance to prove his salesman chops this time round, on multiple occasions channeling a certain fictional 1960s advertising genius in persuading people to buy into Mutiny’s products.

The women don’t have it easy too. Cameron is finally put to the test when Mutiny finds a formidable foe in Westgroup, and Donna struggles with balancing work, her family and an unstable Gordon. Kerry Bishé has stepped up as Donna, as she grabs the meatier role that she has this season and shines in every scene she is in.

You will have noticed that I have barely mentioned the plot events so far, instead focusing on the characters, and that is because Halt and Catch Fire has finally found the nucleus of what makes a good show great – memorable and empathetic characters. In the first season, we had barely any reason to cheer any of the characters on; sure, there were glimpses here and there of the people that were hidden, but they were few compared to the characters in the second season.

It is this emotional investment that propels a show from “I can’t believe that happened!” to “I can’t believe what happened! How’s this going to affect him/her?” This season, I care about what happens in Halt and Catch Fire, not because of the events, but because I want to see what the characters do when these events happen. And the last AMC show that made me feel this way was Mad Men.

Speaking of Mad Men, the season finale “Heaven is a Place” is directed by regular Mad Men contributor Phil Abraham, and it feels remarkably similar to a Mad Men episode. Abraham is not shy to use fixed and tracking shots in a show where camera-work can be experimental, and his directing lends a gravitas to the events that happen.

In particular, Abraham uses framing as a device to illustrate the situations that the characters find themselves in.

For example, Donna in this episode is often framed within a window, showing how she is trapped in her marriage. She starts this episode by looking through a small window into Gordon’s therapy session:

Then, later at home, she recounts her day to Gordon, but in this shot, she’s alone and her marriage with Gordon is really just a vision in a mirror:

Later on, she extorts Gordon into moving to California and joining Mutiny, she has the upper hand but is still trapped within the frame, and metaphorically, their marriage: 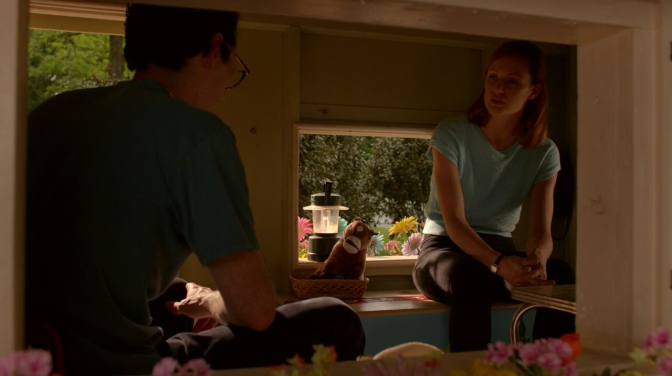 And when Gordon agrees, the noose tightens around their marriage:

And finally, on the plane, Donna breaks down alone in the plane’s restroom, trapped and framed likewise: 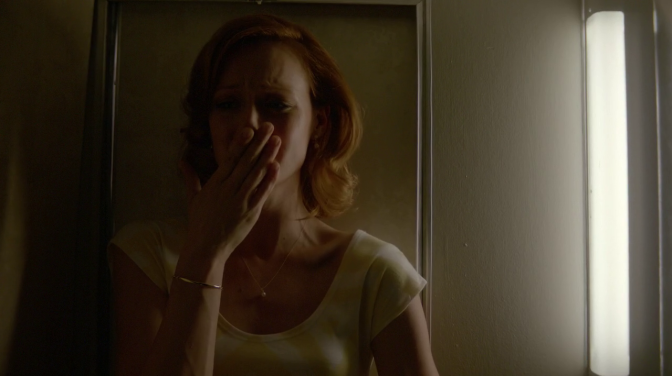 While Donna’s in the air but feeling trapped, in the episode’s other plot, Joe stays but his fortunes are soaring. Joe’s transformation back into psychopath mode was complete when he took Gordon’s virus antidote and started an anti-virus business based on that. I’m not a fan of psychopath Joe, but Lee Pace has such a swagger that I admit I smiled when he did one of his McMillan-patented pitches.at a venture-capital firm.

And Joe being Joe, he wastes no time in using some of his new funds to purchase an entire office floor for his new company and to adopt a power pose, staring out of the floor-to-ceiling windows into the dazzling cityscape. The sky’s the limit:

Of course, this shot looks suspiciously like one from another show…

The difference being that Joe stands alone. He’s going it alone, with no father-in-law or the rest of the cast to help him out.

Overall, the theme of “Heaven is a Place” was people risking everything for their dreams. Cameron, Donna, and Mutiny uproot themselves to California on a wild business idea of owning their own network. Donna and Gordon find themselves damaged and unhappy but now bound even tighter in their marriage. Joe turns his back on being a decent person and embraces his Hurricane Joe persona. Even Bosworth is looking for his heaven, leaving his comfortable new position and rejoining Mutiny.

View all posts by Qi Jian